Researchers of the MPI publish in EMBO Molecular Medicine

The protein Fibronectin (FN) has two completely opposing functions in atherogenesis. A team of researchers around Ina Rohwedder and Eloi Montanez from the group of Reinhard Fässler at the Max Planck Institute of Biochemistry in Martinsried shows this in a recent publication. They demonstrate that Fibronectin worsens atherogenesis by increasing the atherosclerotic plaque area. At the same time it also protects from secondary damage like plaque rupture and thrombus formation by stabilizing the plaque with a fibrous cap.

Atherosclerosis is an inflammatory disease of the arterial wall that primarily develops at areas with disturbed blood flow, as it occurs at vessel curvatures and branching points. The hallmark of the disease is the atherosclerotic plaque, which consists of lipids, inflammatory cells and extracellular matrix (ECM) covered by a layer of smooth muscle cells, termed the fibrous cap. The rupture of plaques is a life threatening condition leading to thrombus formation and vascular occlusion. 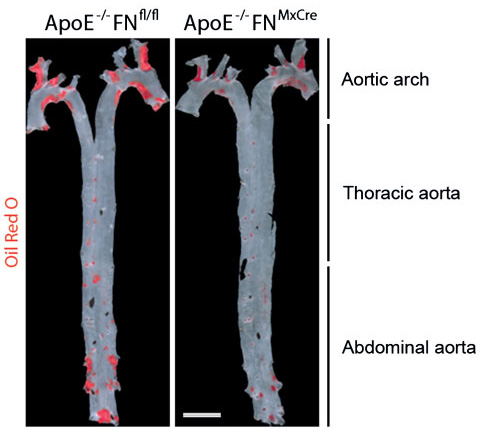 The findings thus give new insights into the common clinical problem of vascular occlusion, which is the commonest cause of death in the western world.

The ECM protein Fibronectin (FN) is secreted by tissue cells and assembled into a fibrillar matrix. Furthermore, hepatocytes can also synthesize large quantities of FN, which is released as soluble plasma FN (pFN) into the blood circulation. Since FN is found at atheroprone areas before plaque development is visible, it is believed that the FN deposits promote the onset of atherosclerosis and accelerate the course of the disease.

It is not clear, however, to which extent pFN contributes to the atherosclerosis. To directly test the function of pFN in atherosclerosis in vivo, the authors fed atheroprone Apolipoprotein E (ApoE)-null mice lacking pFN with a pro-atherogenic high fat diet. They observed that lack of pFN dramatically reduced FN deposits at atheroprone areas, which in turn led to significantly smaller and fewer atherosclerotic plaques.

Plaques not stabilized by fibrous caps

Mechanistically, lack of pFN at lesion sites decreased inflammatory signaling by endothelial cells, which is required for the recruitment of inflammatory cells. With several in vitro and in vivo assays the researchers demonstrate that adhesion of macrophages to the endothelial cell layer is diminished in the absence of pFN indicating that pFN-rich vascular deposits promote plaque size. Interestingly, they also observed that the small atherosclerotic lesions of pFN-null mice lacked vascular smooth muscle cells (vSMC) and failed to develop a fibrous cap.

In summary, the results identify two opposing functions of FN for atherogenesis. FN worsens atherogenesis by increasing the atherosclerotic plaque area, while it protects from secondary damage, like plaque rupture and thrombus formation by stabilizing the plaque with a fibrous cap.