The article “Cathepsin G Controls Arterial But Not Venular Myeloid Cell Recruitment” led by Almudena Ortega-Gomez and senior author Oliver Söhnlein describes a novel mechanism, by which Cathepsin G (CatG) plays a central role for the adhesion of leukocytes in arterial vessels. This newly identified mechanism is only active in arteries, but not in venular vessels.

CatG is immobilized specifically on arterial endothelium and causes leukocytes to activate and initiate firm adherence through the help of subsequent integrin clustering. Neutralizing antibodies against CatG can specifically block this activation step, while leaving myeloid cell adhesion in the microcirculation unaffected. 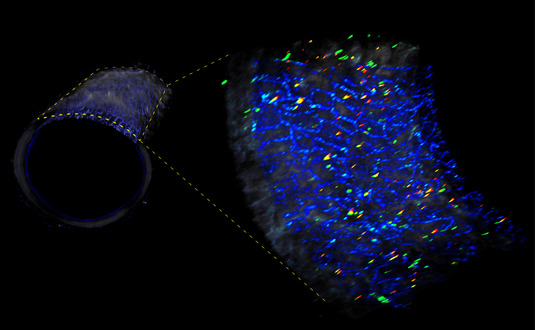 CCL5 and Cathepsin G accumulate at the lumen of carotid arteries; displayed is a part of a carotid artery after the mouse has received a high fat diet for four weeks; CCL5 in green, Cathepsin G in red, endothelial CD31 in blue.

This publication has been a collaborative effort between three projects of SFB 914, namely project B08 (Oliver Söhnlein/Christian Weber), project A02 (Barbara Walzog), and project Z03 (Christoph Scheiermann).

The paper also marks the first publication with a contribution by SFB 914’s central service platform Z03 Spinning-disk confocal microscopy (SDCM). The SDCM platform was established at the beginning of the second funding period in 2015 and provides high-definition as well as ultra-fast 4D imaging of leukocyte trafficking and localization in time and space.